On the 30th of November 2019, the scene is set for the II-IVs team Varsity, this year to be held at the notoriously hilly Shotover Country Park, O*ford’s home territory. With five races to be run we made our way bright and early across the enemy lines.

The first race of the day was the Women’s IIs. A seven-person exodus from the previous year’s team left us with questions only Jerry Krause of 1998 could answer: it was rebuild time. Freshers emerged left right and centre, previous mob match runners had strong pre-seasons, and we found ourselves with a tight-knit team. From sessions to long runs to Thursday tempos, this group trained together and pushed each other along. Early in the race Emily Bradley and speedy fresher Roseanna Temple found themselves in the lead pack, grinding up and down the hills and closing down a ridiculous gap in the last straight to take 2nd and 3rd respectively. Not far behind and also moving through the places was Iona Harrison in 8th, with Grace Miles pushing her on in 9th. The daunting hills were no match for orienteer and fell runner Heather Corden who finished 11th and Izzy Taylor was very close behind in 12th. Lucy Thompson in her first selected team appearance and Libby Brown finally wearing the right shade of blue completed the team. Unfortunately overall it was an Oxford win in 33-45, however with 6 of these runners here for another two years or more, this group will only improve. You may have just seen the next generation of Blues in the making and they excelled themselves. 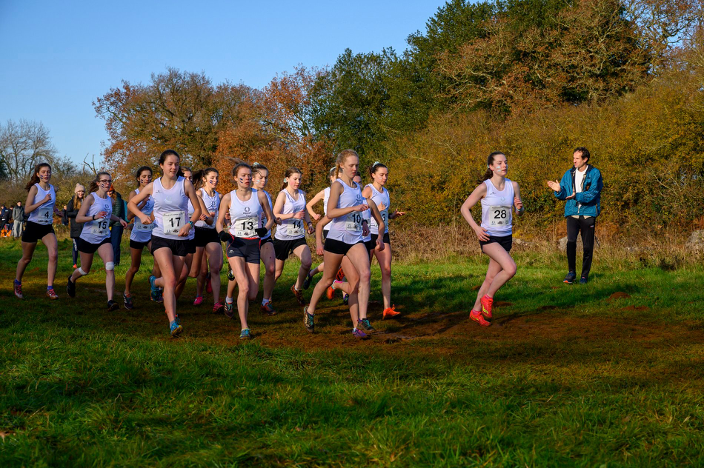 Women’s IIs speeding out of the blocks

Up next: Men’s IIs. We have come so agonisingly close in this race in the last few years, and unfortunately this was no different. But as above, every individual run was something to be proud of. Who would have thought at the start of this term that Jamie Edgerton would be giving Oxford talisman Parkinson a fine run for his money? Shotover is truly his course. Another one to tame the hills was Captain Jose Gray in 4th. What a final Varsity performance that was, henceforth to be recorded as The Way to Race Shotover and to be added to the Cambridge curriculum. Aidan Rigby banished the Varsity demons once and for all in 6th, Captain Lawrence Hollom made it four successive years of improvement in 8th, and Tom Kearns proved he’s not just a track fairy in 10th. Our final pack of Martainn Ramsay, Rob Waddy and fresher Henry Silverstein put our entire squad before their 6th runner, and the final score of 39-41 made clear just how exceedingly close it was. Special mention must go to Martainn and Henry for stepping up very last minute after two injuries. 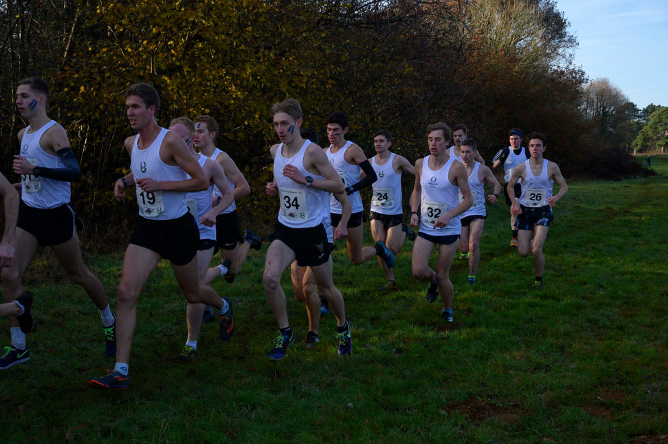 Men’s IIs still in a tight pack after the first out-and-back.

Men’s IIIs: Another team with last minute call-ups exceeding expectations was the Thirds. This was a tough one, and the overall result of Oxford 33 – 45 Cambridge masks excellent individual performances. The star of the occasion was James Ackland, adding a second chapter to The Way to Race Shotover and a silver medal to his collection. Matt Harris was another one moving through the places at the end in 6th. Sometimes in a team race like Varsity, you need to go big and try to go with the front in the knowledge that it’s a risk but that it’s the only way to come out with a win. Captain Su-Min Lee took that decision and whilst it didn’t quite work against a simply too strong Oxford team, no-one can question that he gave it absolutely everything, and still finished high up in 7th. Robin Brown, a stalwart of Varsities, showed his experience after a term of improvement finishing 8th. Next up were two last minute call-ups Rob Perry and George Roberts, proving they deserved those white vests. Angus Harrington performed admirably on a course that is as far away from a track 800m as you can get and sadly not suitable for vaporflys, and Mark Poynting (another call-up) rounded up the team with a strong finish.

James (Which one?) storming down the final stretch to claim second. 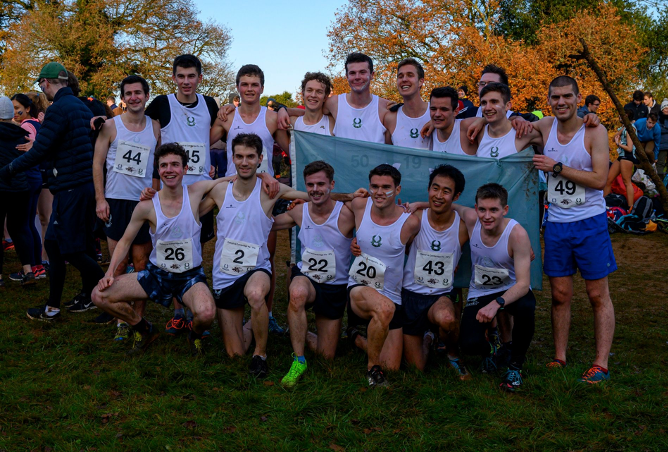 The forth race of the day was to be the Women’s Mob Match. A race open to all where recruiting numbers is a huge advantage. New Harey faces were again a theme in this race, underpinned by big improvements from club veterans. A squad of 18 assembled at the start line, ready to face the hills, it was an intimidating sight. Working together the whole race were Pippa Dakin and Captain Feli Windhagen, matching paces to hold off Oxford runners and finish 2nd and 3rd respectively, adding to the tally of women’s medals. Clara Jarvis had a big run in 8th, and Eleanor Hammond showed off how much she’s improved this year in 11th. Leah strayed from the track and dealt with the hills very well, Izzi showed off her form despite recent illness, and Megan just keeps improving. Jumping 15 places on last year, Annie Acres proved consistency in training works. Building off experience gained at Cuppers, Abi, Mattie, Zoe, Catherine and Abigail had great runs, and Sam battled hard up those hills and came away with a run to be proud of. Alas it was always going to be extremely difficult to beat Oxford on their home turf and they came away with the overall win. 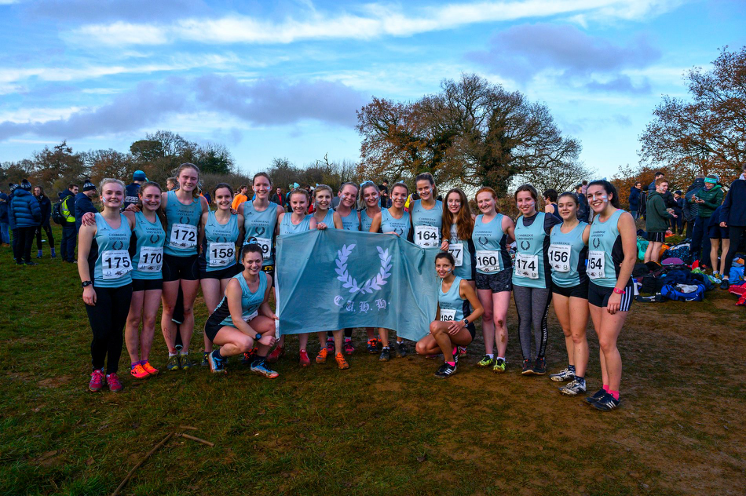 Men’s Mob Match: With 43 finishers, this was the biggest Cambridge men’s squad since 2004 (narrowly beating last year’s of 42), an extremely impressive feat for an away Varsity. It took Oxford’s biggest ever recorded squad of 49 to beat that. Once again, good pacing took runners to brilliant performances. Jiri Kucera proved that after leaping multiple places in the second lap to finish top Cambridge runner in 9th. Aidan Williams and Tibo Rushbrooke followed close behind, leading loads of little packs of Cambridge runners. It was incredibly pleasing to see Josh Harris’s return, Sameer’s excellent finish, Toby Speirs jumping 23 places from last year, Captain Hamilton similarly jumping 11, loads of runner improving on Cuppers such as Andy, Ian, Jun, James Cole, Will and Inigo, Jeremy T’s long anticipated return from injury (in style despite an ankle turn in the last stretch), Robin‘s sprint finish and lots of first XC performances from Bob, Jonny, Marcus and Ethan. 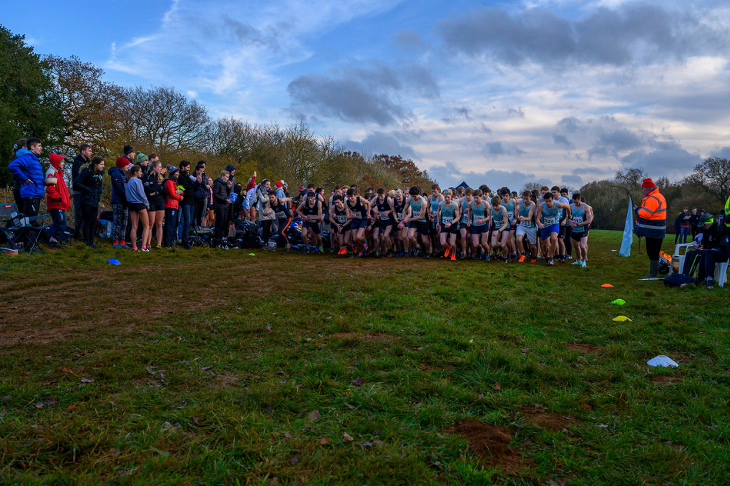 With another year of Varsity races completed the Cambridge tribe headed into O*ford for a joint celebration, with many determined to at least come away with the after-party win.