BUCS Cross – A day to remember

BUCS cross country is one of the biggest races of the season for the Hare and Hounds, it gives the athletes an opportunity to pit themselves against other runners from all universities in the country, as well as escape the Cambridge bubble to Exeter for the weekend. With medals gained by the men’s A team in the previous two years this year there was a different feel to the competition – BUCS wasn’t entered as underdogs but as contenders. Articles about “the big three” Loughborough, St Mary’s and Birmingham were dismissed, knowing that there was going to be some more medium spring green in the mix this year.

As pre-race haircuts were perfected (see photos) the lead up to BUCS was dominated by emails from Su-Min and Iain reminding us that the bus would leave at 3pm on Friday and news stories of an apocalyptic few cms of snow that would definitely ruin everything, both were published with equal frequency and foreboding. Neither of these were enough to stop Tom Goulding on a valiant search for mini eggs, a prophesy of the determination that was to be a theme of the weekend for the Hareys. The journey down to Exeter gave Paul Aste enough time to solve the real philosophical conundrums facing society today, questions such as “If clouds are made of water how do they fly?”, “Why do parents allow the tooth fairy to break and enter, then steal poor children’s teeth?” and “Why is Monday?” were discussed at length. On arrival the discovery of long sofa cushions quickly devolved into jousting matches that soon dissipated to allow everyone to get an early night, we did have a race to run.

On Saturday morning faces were adorned with light blue paint as the coach made its way along a road that was 0.8 coaches wide, and it became clear that it was going to be somewhat nicer than last year, the driving rain had been replaced by clear blue skies and sunshine, ankle deep mud with pristine grass. Once unloaded the new official Hare and Hounds gazebo was put up and the course was inspected, the steep finishing hill, narrow start and twisty course were all noted as well as the dip in the lake, which later became an optional feature. The women were up first in the biggest race of the day, featuring 640 runners on the start line. Niamh led the light blue vest home with a strong run to finish 13th, followed by a string of Cambridge runners Emily Ruane, Nancy Scott and Phoebe Barker in 24th, 25th and 27th, followed by Rachel Longstaff and Fiona Bunn in 35th and 40th to round out the first two scoring teams of 3, finishing 7th and 10th (3rd second team) overall in the team competition making this one of the strongest women’s team in the country. Performances were also put in for Cambridge by Lizzy Apsley (44th), Joni Wildman (89th), Becca Frake (125th), Lucy Thompson (127th), Emily Bradley (190th), Eleanor Hammond (243rd), Helen Ockenden (263rd), Emese Ratkai (295th) and Amelia Wainwright (400th) 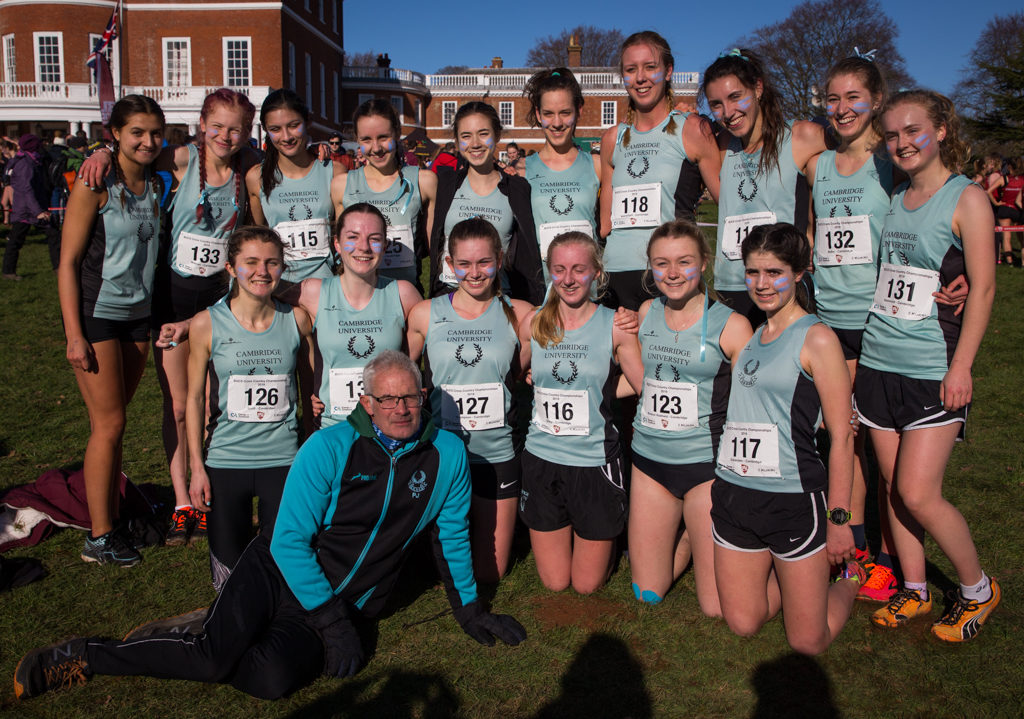 Next up was the highly anticipated mens A race, which turned out to be a true showcase of quality. The race was headlined by Olly Fox breaking away with the leaders in an impressive three man battle throughout the race, eventually gaining a huge individual Bronze (this is the first individual men’s medal whilst Su-Min has been at Cambridge!). The performance was followed up by the rest of the team proving themselves over the 3 lap course, Will Ryle-Hodges finished in 14th, fresher Jeremy Dempsey had a great race to finish in 16th, Aunty Crout put in a kick to gain an extra place finishing in 19th which would turn out to be a deciding factor in the team standings. George Gathercole and Norman Shreeve also performed well to show the depth in the Harey men’s squad, finishing 29th and 31st respectively. This performance was enough to gain a team silver medal scoring 52 points, closely followed by Oxford with 53 points, moving Loughborough out of the medals. 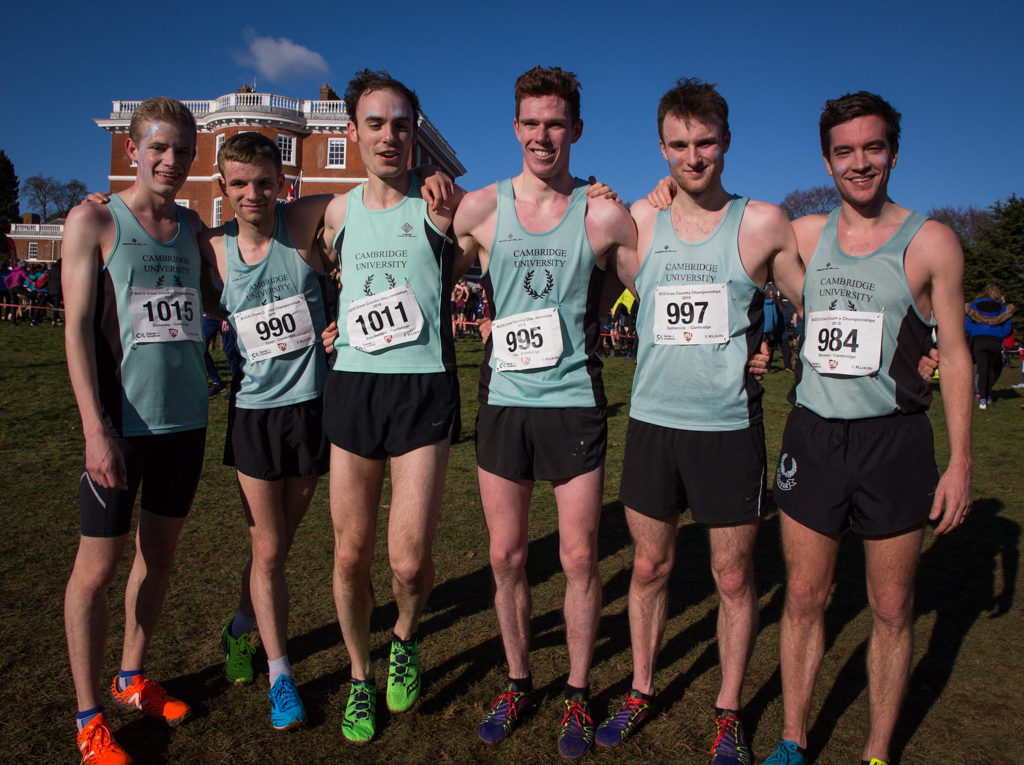 The final race of the day was the men’s B race, usually at this point of the day a BUCS course has turned into a mud bath but thankfully the weather had stayed clear and the ground dry which played into the hands of the track fairy’s in the squad. This allowed James Coxon to lead the Cambridge team in 7th, followed by a checkerboard Paul Aste in 12th, Joe Massingham in 16th and Paul Pruzina showing his strength on the hilly course finishing in 22nd to round off the first scoring team in a massive 3rd place. The next scoring team finished in 9th overall and was made up of Aiden Rigby (32nd), Jacob Brockman (34th), M.J Cox (35th) and Iain Davies (45th). Further back more strong runs were had with Pete Cameron (52nd) Jamie Edgerton having a great second half of the race finishing in 61st, Jose Gray (71st), Tom Goulding (81st), Matt Harris (86th), Harry Cox (93rd), Rob Waddy (95th) and Su-Min Lee (99th) finishing off Cambridge’s 16 in the top 100, compared to 13 last year. Tom Kearns finished 117th, Hamilton Allport didn’t have to deal with a water jump this year and finished 179th, Freshers Rob Perry, Harry Kettle and Topy Speirs all easily made the top 200 finishing 150th, 165th and 180th. George Roberts and Max Bloomfield made up the triathlon representation in 183rd and 197th.

With a medal haul unparalleled in recent years the team spirit and excitement of the podium was a truly magnificent spectacle, showing that ridiculous amounts of stash and sports scholarships aren’t needed to produce good performances, chess board haircuts and greyhounds shirts can do a pretty good job too. With chants about Olly Fox and his puns, Phill O’Dell and his magic and our lack of social skills there was an atmosphere to be remembered. 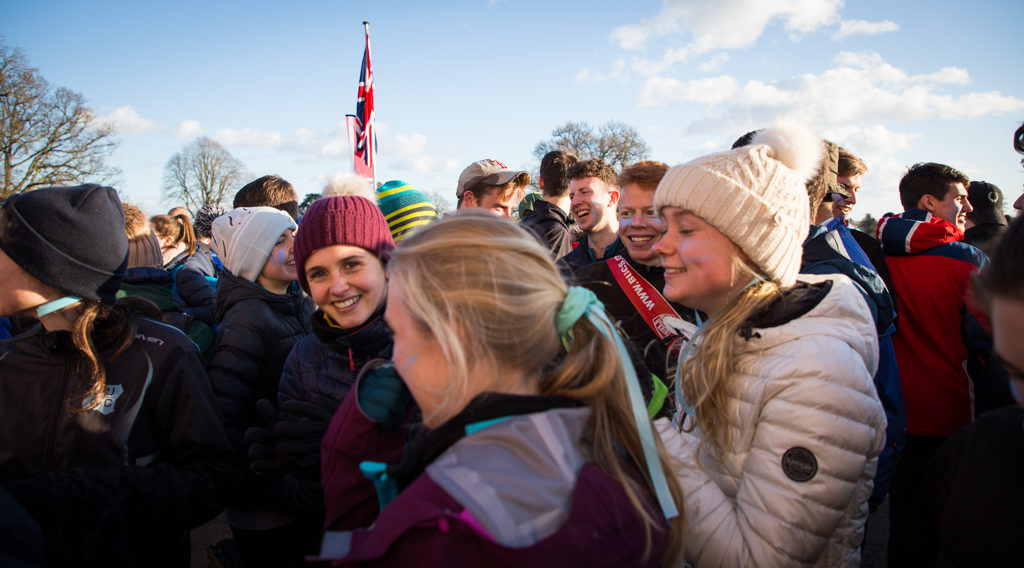 Smiley Hareys as the medals are collected 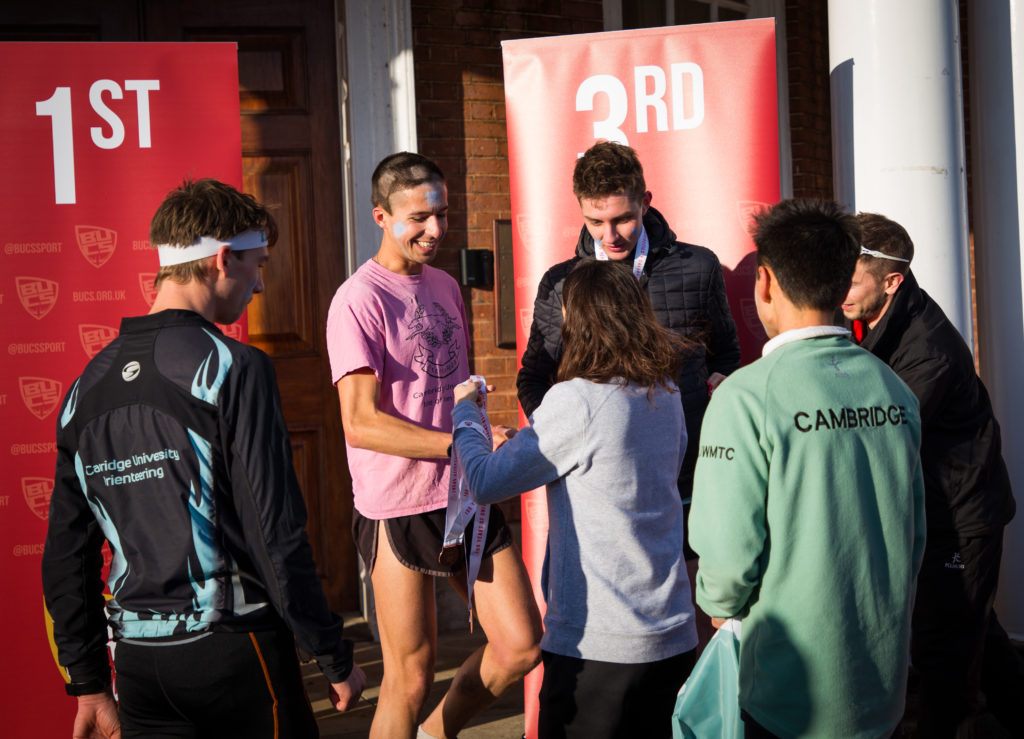 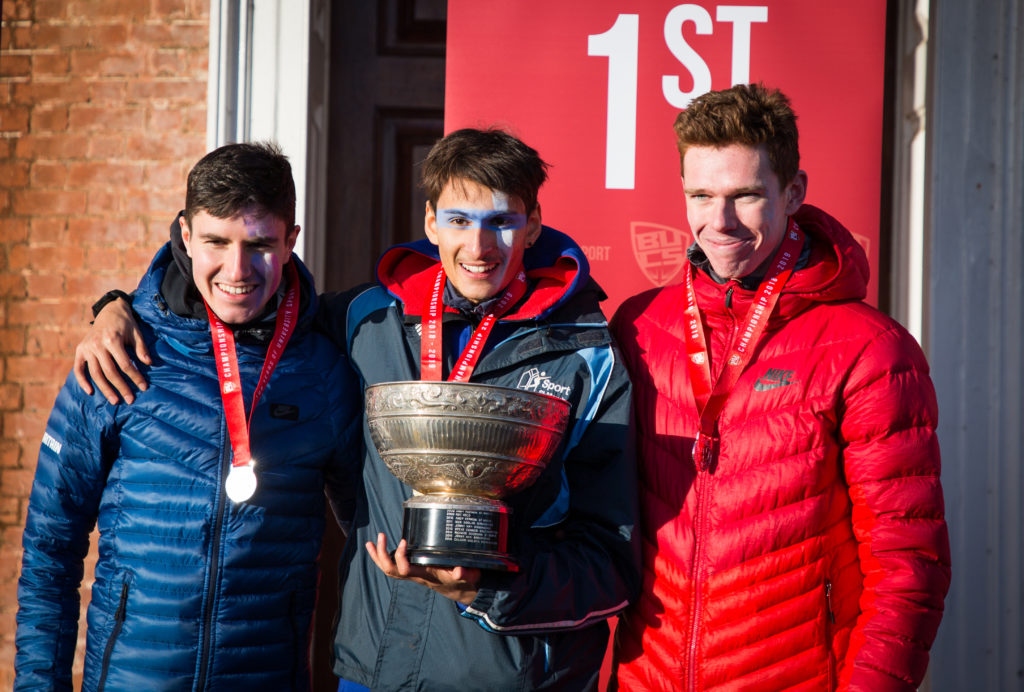 Olly on the podium 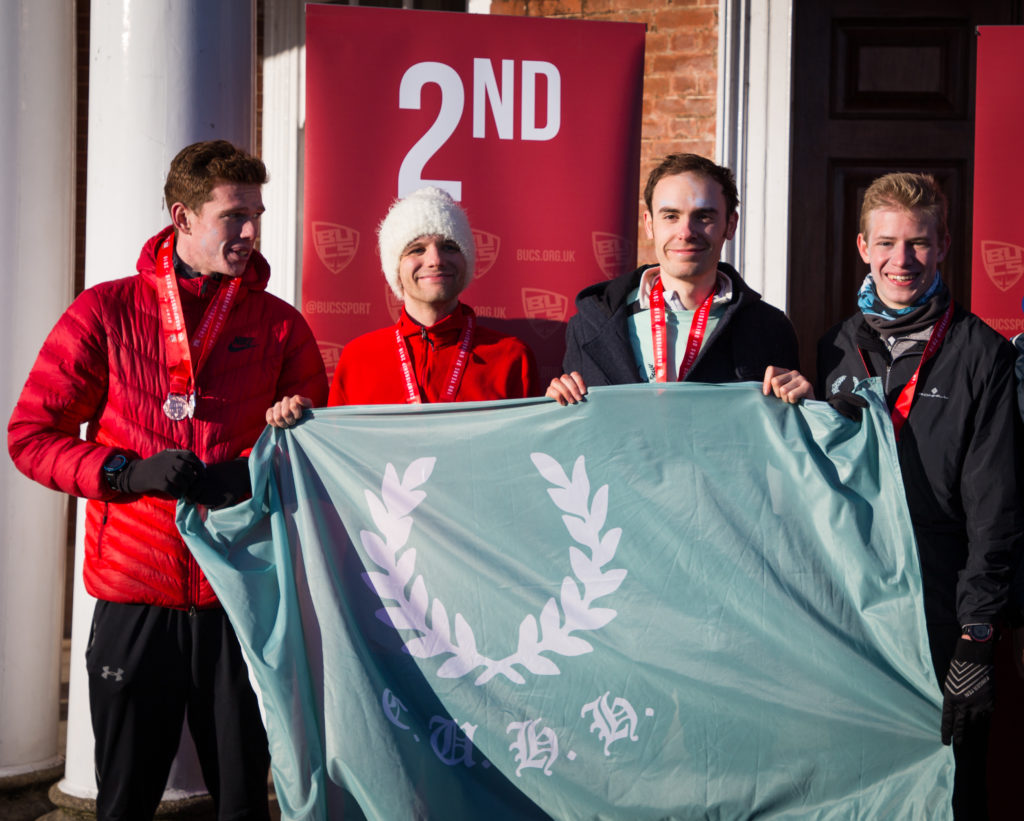 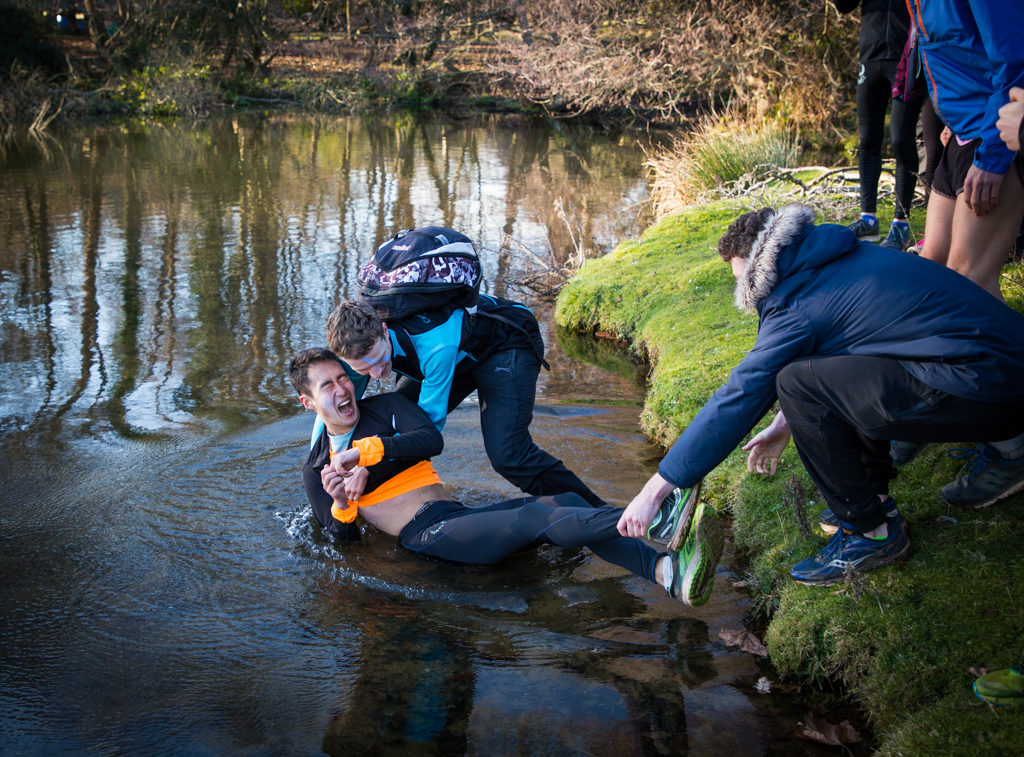 Once all the racing was done there was one competition that could still be won: the after party. Results of this are yet to be published but rumour has it Pete Cameron put in a pretty good performance. 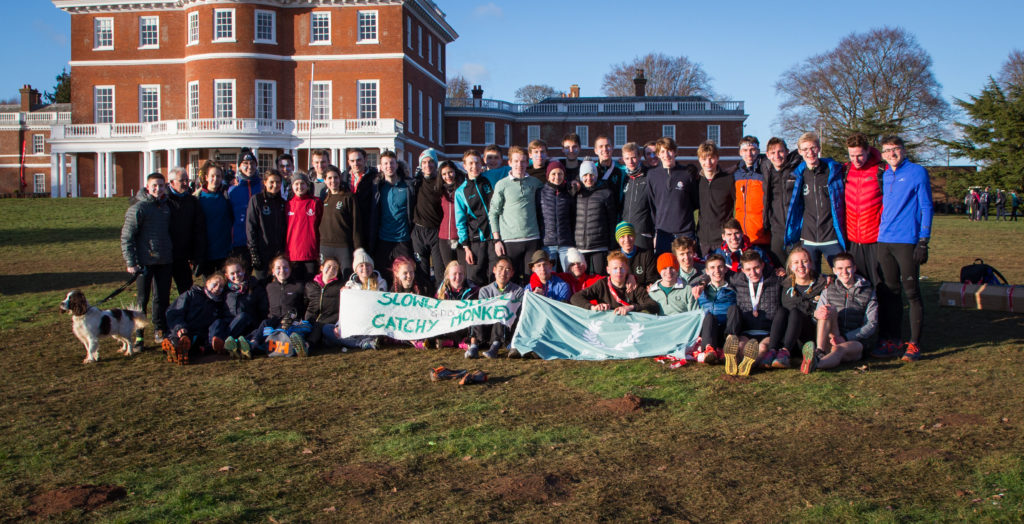